"If history were taught in the form of stories, it would never be forgotten."
​R. Kipling

The Oregon Trail may serve as American history, but many still choose to travel the trail and adventure their way from the east coast to the west coast. Here are just a few stories of travelers to Westmoreland on their quest to experience the historic Oregon Trail! 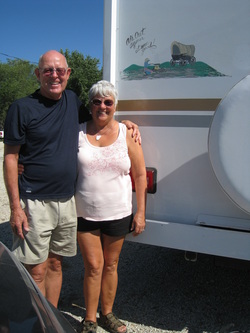 "Bill and Shirley were following the Oregon Trail on their way home from recent travels in August, 2012.   Note the covered wagon painted on their RV.  They called from their RV park and made special arrangements with us to visit our museum during hours that we are not usually open.  We are happy to do that when possible for those traveling through who cannot visit during our regular hours. And Bill even did a little repair for us on the lock on our stone church." 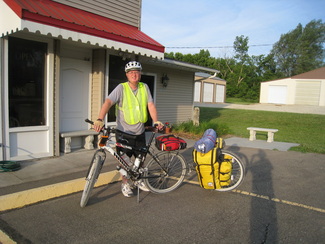 "Don Weinell from Louisiana completed the first phase of his four-year plan to ride his bicycle the entire length of the Oregon Trail from Independence, Missouri, to Oregon City, Oregon in May, 2012.  He was greeted when he arrived in Westmoreland by a member of  Rock Creek Valley Historical Society who gave him a brief tour of the sites in town and provided bed and board overnight.  He is shown here the next morning ready to head on down the road."  Visit his blog here! 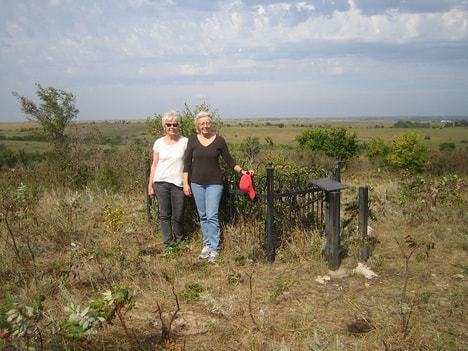 Gravesite of early traveler, one of many who died on the Trail before realizing their dream.

This site in the rural Westmoreland area was  called to the attention of the State Historical Society by the landowner in 1929.   The Society was given permission to remove the stone marking the grave with the name and date scratched in.  Other stones that were originally placed on the site still remain on the grave.

Eventually,  a fence was made by a local craftsman and placed at the site.  Replicas of the original stone with name and date have been placed on the grave and on display in the museum in Westmoreland.  And a sign with  what information was available at the time.

Very little was known of the person buried there until these two ladies came to town and visited the museum seeking information about the location of the grave.  A local couple got permission from the landowner  to take the ladies to the site--to the great satisfaction of both visitors and hosts.  The ladies came upon the information about S.M. Marshall, whom they identified as Solomon from their research of family genealogy.

They further informed us that Solomon had come from Kentucky leaving a young wife and children behind.  As was so common with the early pioneers, wife and children were to follow after "Father" had settled somewhere and found a place for them to call "home."  When he knew he was dying he requested that he be buried on the top of a hill, facing the direction of Kentucky.

The picture only presents a hint of  what one experiences looking out across the land from that place.   Were the early travelers more struck by the awesome sight of those rolling hills, a spiritual experience for those of us who live in the area, or were they more filled with fear as they recognized the prospect of the days, weeks, months ahead of navigating wagons and family through the unknowns ahead of them? 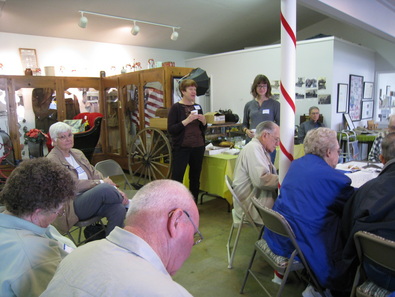 Katie Goerl, KSU senior is researching information related to one-room schools as part of her work as intern with the Chapman Center for Rural Studies.  These former students of one-room rural schools were invited to come together at the museum to share their memories of those early days with her. She and her mentor Dr. Morgan, Research and Curriculum Director  at the Chapman Center, are  shown in the picture on the left waiting for the participants to fill out their questionnaires.  They elicited interesting discussions from these "alumni" of those rural schools of the past. Two pictures of students standing in front of Jenkins School are also shown below. 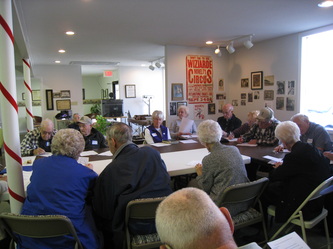 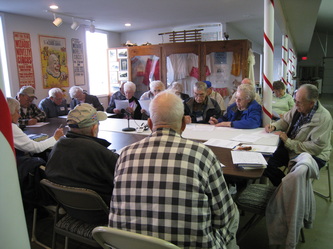 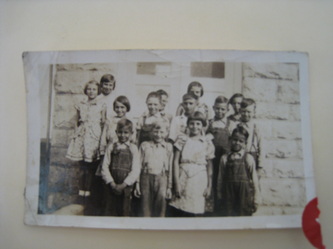